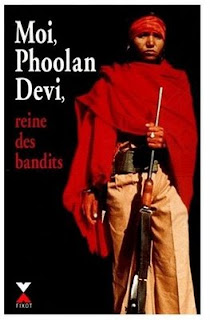 She wears Jeans, she carries a stem gun which she can use with great accuracy. She was oppressed by the Thakurs who insulted her feminity. On feb 14th she gathered her gang of men and shot down all the thakurs avenging the fire that was blistering within her..

But here the question is, how many women turn Bandit queens avenging the rage and vengeance they hold within?? and how many sigh at their fate in silent diligence??

This was the story and fate of one woman of India, the country that worships godesses, epitomises the nation to a mother and chants sayings of Manusmriti, the scrpits depicting female bondage ..the writers intentions was different..the essential essence of the scripts and epics of the great indian heritage being manipulated to satisfy the male chauvinist punks..

If one gathers the wits and guts to watch the movie"the bandit queen" one could understand what this so called "queen" had gone through..Where was she living a queen???In a temple of bondage???

I know, to all men who have already wrinkled their forehead in disgust...hey!!!wait before you tag me as another tigress version...God created the man before he made the woman..because there alwatys have to be a draft before the master piece...CHEERS!!!!