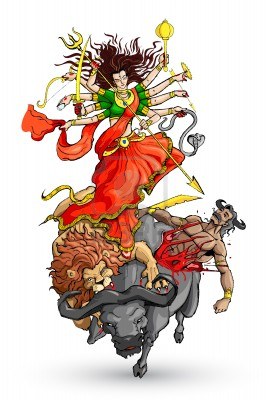 For one brief and beautiful sliver in time, I had empathized with a steel woman in the Hindu Mythology. The fiery 'Durga', powerful and fearless. She invoked in me a sense of rebellion which had a 'transformational' effect on my character.

To me, she was a symbol of power and prowess. Her intolerance of being mistreated spoke volumes of her persona. As a young girl who was being told that she was being too bold, or that she laughs out too loud, I had every reason to identify with her aggression. (Not to mention my secret desire to punch all chauvinists in their face).

As a child, all the goddess themed movies I was exposed to, only fueled my blind & bloated admiration. I watched wide eyed as the immaculate goddess slayed the heinous demons and Rakshasas. The unstoppable fierceness used to send shivers as I sat there glued to the TV.Well, I may be categorized  a rare species here, but my fascination with characters of female dominance does not end there. Well lets just call it a divine feminist inspiration, but what I see is a true portrayal of free spirited woman true to her very existence.

This bare chested goddess celebrates her sexuality.She assumes 1000 hands form to combat the unrestrained male aggression being hurled at her from all directions. The 'mousy' me recognized the almost 'Invisible' fierceness that lay submerged. The force that awakened me to the clash of her swords, the wave of her tresses, the depth in her eyes, her sensuous form, alas, I find in her the legitimacy and recognition I was always in search of.